Chelsea fought back from an early setback to register an impressive 3-1 win over West Ham to kick-start their Women’s Super League campaign at Kingsmeadow on Wednesday night.

After suffering defeat at Liverpool on the opening weekend, Emma Hayes’ side have recorded back-to-back home wins to give a far brighter complexion to the start of the new season.

Dagny Brynjarsdottir headed the visitors into an early lead (3), but Fran Kirby levelled prior the break (40) before Sam Kerr (58) and Millie Bright (62) completed the turnaround.

Lauren James saw her second-half penalty saved, but the result moves Chelsea up to fourth place while West Ham, victors over Everton on the opening day, have dropped to ninth after a second straight defeat.

Player of the match: Fran Kirby.

How Chelsea made it back-to-back WSL wins

The match at Kingsmeadow was rearranged from September 11 following the death of the Queen.

West Ham, who have never beaten Chelsea in the league, took the lead after just three minutes when Iceland midfielder Brynjarsdottir powered in a header from a corner.

The Blues – who beat Manchester City after losing their opening match at newly-promoted Liverpool – looked to make a swift response as Bright’s goal-bound flick was clawed off the line by Irons keeper Mackenzie Arnold.

Kerr cut inside from the left and crashed a 20-yard drive against the far post and the Australian forward soon hit the other post with a low effort as Chelsea remained on the front foot.

The equaliser eventually arrived five minutes before half-time when Kirby dug out a cross from the left to chip the ball into the top corner.

Chelsea remained on the offensive at the start of the second half.

Their pressure told just before the hour when Kerr slotted in after West Ham failed to clear following a corner which dropped into the six-yard box.

England defender Bright added another in the 63rd minute, heading home from a corner.

With 15 minutes left, Chelsea were awarded a penalty after Lucy Parker brought down James but the forward saw a tame spot-kick saved by Arnold down low to her left.

What the managers said… Chelsea manager Emma Hayes believes her side were deserved 3-1 winners over West Ham in the Women’s Super League.

“The side showed a great reaction to conceding an early goal and the scoreline could have been bigger. I feel we’re improving and progressed from the Man City game – we grew in confidence.

“It’s so tough for new signings to learn quickly but I’m really happy for Svitkova and Perisset who made their full debuts tonight.

“Beth England was omitted from the England squad but she’s shown a tremendous attitude. The current international calendar makes no sense – they absolutely have to be looked at and it’s right they are. It’s not right for player welfare.

“I can’t fault the application of players – it’s such a nice dressing room that’s growing in confidence. The team are where they should be after three games but there’s still some rust.” 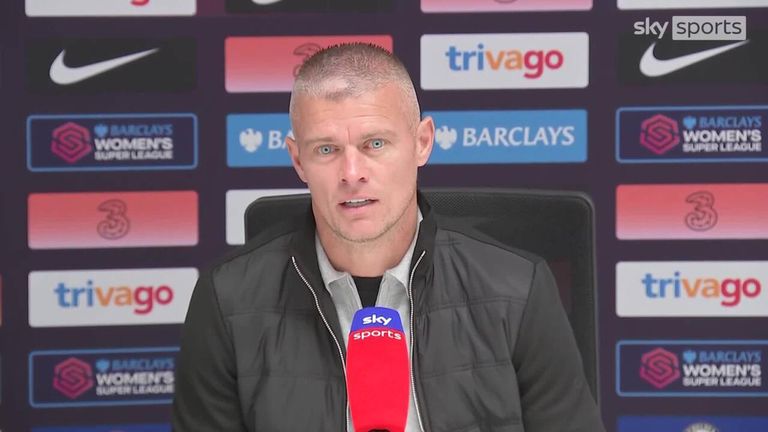 West Ham manager Paul Konchesky felt his side were perhaps unfortunate to come away with nothing following their 3-1 defeat at WSL champions Chelsea.

“You know Chelsea’s attacking power that they’ve got. We spoke about it before the game. I thought Fran Kirby’s goal was a little bit fluky if I’m honest, and then (conceding) two set plays which is very disappointing on our behalf.

“The set plays (we conceded from) were unnecessary from us, I’m disappointed in them. Obviously the goalkeeper saved a penalty as well. Overall it’s tough to take but we’re playing Chelsea and maybe we have to take that today.

(On playing in the League Cup this weekend). “It’s been quite a tough two weeks – three games in two weeks. I’ll try and freshen the squad up for the weekend to give a few players a rest before they go on international duty. I’m looking forward to the cup game and hoping we can get a cup run too.”

Player of the match – Fran Kirby

“I’m enjoying my football and I’m glad I’m getting into the box as much as possible.

“We are so calm, we don’t stress. Previously we’d go down and get a bit loose. there’s nobody screaming off their heads. There’s a real calmness in the team.

“Overall we have to improve. We weren’t satisfied with the result [losing to Liverpool on the opening day] but there was still that calmness. We’re just approaching every game having that composure and belief that we can get the result.”

Analysis: A huge win come the end of the season?

“Chelsea head into the international break off the back of successive WSL wins. It hasn’t been the slickest of starts from the five-time champions, but at Kingsmeadow they have continued their formidable form. Wins over Manchester City and now West Ham mean it is 27 games in all competitions at home without defeat.

“Emma Hayes knows her side were again not at their best during the opening period, but the second half gave way to a very one-sided affair with the 3-1 scoreline flattering West Ham.

“This win could prove very important come the end of the season. Hayes didn’t look completely happy but this was job done having emerged a different team in the second half. The longer the game went on, Chelsea’s physicality and quality shone through.

“West Ham weren’t allowed to create a rhythm and build on the positives from the opening period. Paul Konchesky consoled his players at the final whistle and there was a hint of offside about Sam Kerr’s goal – Chelsea’s crucial second – but the hosts were ultimately clinical when the chances arose.

“Four teams are now on six points, albeit the sides above Chelsea – Arsenal, Manchester United and Aston Villa – have all played two. This season already looks like it will be fiercely-contested at the top.”

Chelsea next play on October 16 when they go to Everton after the international break. West Ham play the day before on October 15 with an away game at Aston Villa.