Jurgen Klopp rued another “rubbish” Liverpool start in their thrilling 3-3 draw with Brighton – and admitted the lead they threw away would not have been deserved had they held on for three points.

The Reds founds themselves 2-0 down to Roberto de Zerbi’s Seagulls inside the first 17 minutes, thanks to Leandro Trossard’s double, and while Klopp’s Liverpool managed to overturn the deficit to a 3-2 lead, the Belgian winger struck again with seven minutes left to leave the spoils shared.

It is the 10th time Liverpool have conceded first in their last 15 competitive games and Klopp believes the inability to get the first goal has had an impact on their recent form.

“I spoke to the boys in a similar way to how I speak to you: I don’t know how many times I have to say we need a reaction,” said Klopp after the game. “The first goal has an impact on both teams.

“They felt like they are flying. We felt like ‘okay, here’s this rubbish start again’. We fought back, that’s positive, although it doesn’t feel it in the moment. We have to accept a point.

FREE TO WATCH: Highlights from Liverpool’s draw against Brighton in the Premier League.

“We could have defended much better. It’s football and you have to accept it. On a day like this when it starts like this, it’s important to fight your way through. It would be nice if you could win it. We always have problems against Brighton, who are a very good football team but we have to do better.

“I know we have 10 points and that’s the reality. I don’t hide from that. We have to go together and build.”

‘I’m not sure we deserved a win’

The dropped points leaves Liverpool in ninth place with 10 points – 11 behind leaders Arsenal, though Klopp’s side have played a game fewer than the Gunners.

Klopp admitted he was not sure that Liverpool’s display merited all three points as he believed De Zerbi’s Brighton, who were playing their first game under their new Italian manager, deserved something from the game.

“Brighton are a really good football team and a real team. It was a different formation, we were surprised a little bit? Yes, a little. But we were already 2-0 down when we adapted from that.

“We scored our goals which were the counter-attacks. We could have won but would we have deserved to win? I’m actually not sure. Brighton deserved something. 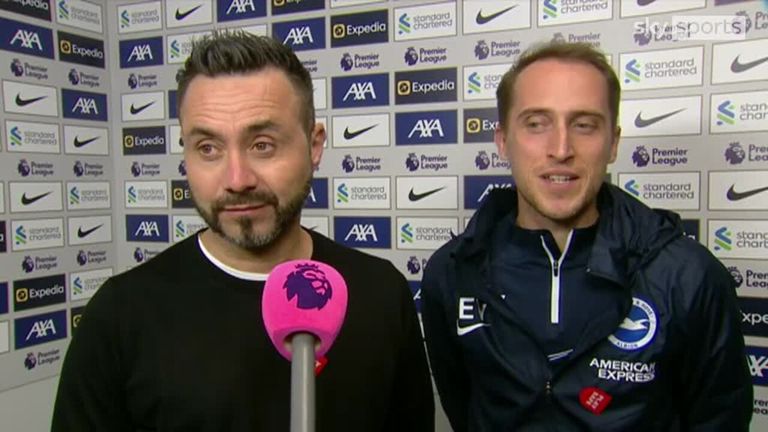 Brighton new head coach Roberto De Zerbi said there was a chance for his team to come away with the victory, following their 3-3 draw against Liverpool at Anfield.

“With all the good things we did during the week, the confidence is a little lower and when someone stamps on it, it is really difficult. We have to accept it. Of course it is not enough for us but it is what we got.”

De Zerbi: Leaving with nothing wouldn’t have been right

New Brighton boss De Zerbi was delighted with his team’s performance at Anfield and felt it would have been unfair had his team not found that late equaliser.

“I’m proud of my players, for my club,” the Italian said. “There was the possibility to win the game, but Liverpool is a fantastic team and I knew before the game that it can be difficult and it was.

“The point is important for us because if we hadn’t got it, it wouldn’t have been the right result. I’m not trying to say we meant to win, because Liverpool is Liverpool, but we had a lot of chances to score. If we went on to win the game, we wouldn’t have felt we had stolen anything.

“We need to learn how to improve in the ball possession and the ball speed. In the Premier League, it’s difficult to control games and only Man City are able to do it, but our target is to control much more of the game.”

And on hat-trick hero Trossard, De Zerbi added: “When he was in the national team with Belgium, I sent him a message. I told him he needs to increase his goal output and that made me happy today.”