Mikel Arteta was eager to downplay expectations after Arsenal’s north London derby win over Tottenham. “We have done nothing yet,” he said in his post-match press conference.

But the jubilant Arsenal supporters who filed out of the Emirates Stadium, singing as they went, following a resounding victory which took them four points clear of second-placed Manchester City, are unlikely to listen. Their team look like contenders. Highlights from Arsenal’s win against Tottenham in the Premier League

Why shouldn’t they dream? Arsenal have taken 21 points from a possible 24 so far this season and their latest victory, achieved in a raucous atmosphere at the Emirates Stadium, showed for the first time that they can do it against big-six opposition.

Their transformation is above all down to personnel. Rob Holding, Cedric Soares and Mohamed Elneny, all of whom started the costly 3-0 loss to Spurs in May, are gone from the team. In, instead, are William Saliba, Oleksandr Zinchenko and Gabriel Jesus.

The changes represent a huge injection of quality. Arteta said Jesus has taken his side to a “different level” in his post-match television interview but the same can be said of Saliba too. The Frenchman was once again imperious in the heart of Arsenal’s defence.

With Thomas Partey also excelling in midfield, freeing up the reinvented Granit Xhaka to play further forward, Arsenal suddenly have a formidable spine and tools which allow them to aim higher.

Whether they can sustain a title challenge remains to be seen but it is already clear that this Arsenal side can aim higher than a fourth-placed finish. This was a dominant performance and the underlying numbers – Arsenal’s expected goals differential is second only to Manchester City’s – show it was just one of many this season.

Liverpool slump a concern for Klopp 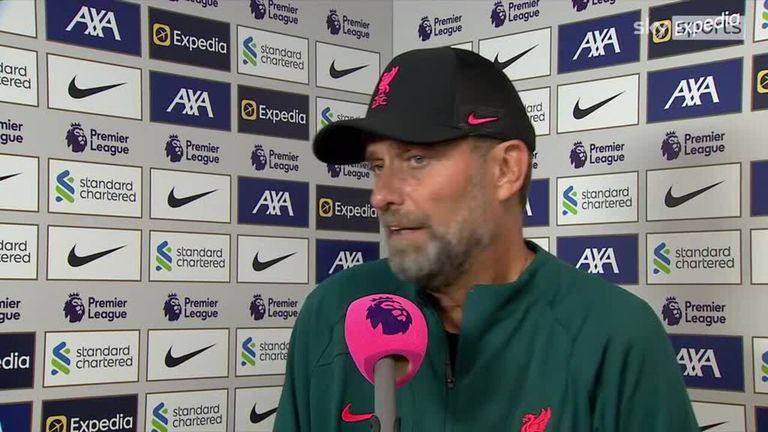 Jurgen Klopp doesn’t think his Liverpool side played a particularly good game, despite coming back from 2-0 down to draw 3-3 against Brighton

Where to start? Well, that’s just the issue. Liverpool have forgotten how to start football matches. A catalogue of errors in the first half led to a two-goal deficit inside 20 minutes against plucky Brighton.

It prompted Jurgen Klopp to brand his side’s beginnings to games as “rubbish”. Liverpool managed to salvage something from the wreckage, but by no means was it convincing. They are surely out of the title race already, seven games in.

While Leandro Trossard was busy launching the Roberto De Zerbi era in style, Klopp’s Liverpool tenure is facing one of its toughest chapters yet.

In truth, the game could have been well beyond the Reds before the half-time interval, if not for some astute work from Alisson – who was abandoned on multiple occasions by his faltering backline.

Even the once impenetrable frame of Virgil van Dijk was found wanting late into the game as Trossard capitalised on a failed clearance to level the scores. James Milner was equally guilty of idleness on that occasion.

FREE TO WATCH: Highlights from Liverpool’s draw against Brighton in the Premier League

Brighton were brave, unafraid of the Liverpool press, which speaks volumes. Not too long ago, it would have been considered suicide to travel to Anfield and attempt to outpass the home side. Yet, such was Brighton’s confidence, they played repeatedly through the thirds with little intervention, particularly during a fruitful first half.

They carved through Liverpool like butter. They bypassed the high press with relative ease. Their attacks flowed with all the precision and assurance of a team inside the top four. And that’s exactly where the Seagulls find themselves, five places better off than Liverpool in ninth.

Should this run continue, De Zerbi is going to thoroughly enjoy his south coast adventure, while Klopp needs to somehow lift the fog that surrounds his underperforming stars, before it consumes them completely.
Laura Hunter

Does big game pressure get to Lloris?

Antonio Conte had plenty to be disappointed about after Tottenham’s 3-1 loss to Arsenal. Disapproval of VAR after Emerson Royal’s red card and not making enough of some good areas his attacking players ended up in were high on his list.

But at the top should be his side conceding so quickly after half-time – and a lot of the blame should fall at his goalkeeper Hugo Lloris.

The French goalkeeper, normally such a good shot stopper, could only palm Bukayo Saka’s tame shot straight into a dangerous area. A failure to be assertive led to chaos between him and Cristian Romero, allowing Gabriel Jesus to bundle the ball home,

Suddenly, all of Tottenham’s good work in the first half to withstand heavy pressure and peg Arsenal back was gone. Just over 10 minutes later, Emerson Royal was sent off and the game was “killed totally”, says Conte.

Lloris has developed a reputation for being an excellent shot stopper – but a series of high-profile mistakes in big matches lets that status down. Since the start of the 2017-18 season, Lloris has made 11 mistakes leading to goals – only Jordan Pickford has managed more than any other Premier League player, including outfield players, in that time.

But since he made his Premier League debut, Lloris makes a mistake every eight matches against Big Six sides – compared to one in every 25 against the other teams. There are also international mistakes to remember as well, most notably in a vital World Cup qualification match for France against Sweden in 2017 – and the World Cup final win over Croatia a year later.

Conte and Tottenham have enjoyed a good record in big games. But Saturday’s showing at the Emirates Stadium could hint at a regression in that form.
Sam Blitz

Progress under O’Neil but are Bournemouth waiting on takeover?

Gary O’Neil continues to make steady progress with Bournemouth in his position as interim head coach, and this latest point against Brentford extended their unbeaten run to four Premier League games – their longest without a defeat in the league since October 2018, when they also went four undefeated under Eddie Howe.

It might have been more had novice Premier League referee Thomas Bramall seen a first-half penalty incident the same way as VAR John Brooks, when he opted to stick with his original decision after Kristoffer Ajer challenged Jordan Zemura inside the box.

This was not a good advert for the Premier League, coming after an interminable international break. With a £150m Bournemouth takeover fronted by Las Vegas businessman Bill Foley on the horizon, there was very little razzle-dazzle on display. Highlights from the goalless draw between Bournemouth and Brentford

It’s a strange audition period for O’Neil, who was nominated for manager of the month for September. There is very little more he could have done, following on from that 9-0 loss to Liverpool which brought an end to Scott Parker’s reign and appeared to confirm a gulf in class at this level.

O’Neil will hope to be given the home game against Leicester next weekend to impress the prospective new owner and to stake further claims for the managerial role on a permanent basis, and having kept a third clean sheet of the campaign it is clear where his side must improve.

The Cherries have now failed to score in any of their last three Premier League home games, their longest-ever run without a goal at the Vitality Stadium in the top flight. An xG value of less than one in each of their eight matches, the most frequent of any side in the league this season, highlights exactly where he will target improvement.
Ben Grounds

Bramall comes to Brentford’s aid on off day

This was the Premier League, but not as we’ve got to know it. Despite having been in existence since 1889 and 1899 respectively, this was a first top division clash between Bournemouth and Brentford.

As recently as 2009, this was a League Two encounter while referee Thomas Bramall was taking charge of only his second Premier League match. But there was very little to set pulses racing and for Thomas Frank, the best performer on show during his 200th match in charge of Brentford was arguably the match official.

On three separate occasions, Bramall’s decisions surrounding penalty calls favoured his side. Frank unsurprisingly hailed the inexperienced match official for the conviction in his decisions, amid a patchy afternoon for the Bees.

Frank said: “I’d like to praise Thomas Bramall for his job today, he’s a young referee, and every Premier League game is important. His character and calm head was important in a very, very stressful moment, when you’re called over to the monitor.

“It’s a decisive decision for the game, and nine times out of 10 most likely it’s a pen. But he sticks to his decision and that says a lot about him. I’m not in doubt that’s not a penalty, so very well done for him.”

After the feast, the famine. Five goals in the win over Leeds has been followed up by failure to score against Arsenal and now Bournemouth.

Frank will take comfort in a first Premier League clean sheet away from home in over a year, having failed to do so in any of their previous 19 such fixtures, but a statement display is now needed at Newcastle next weekend.
Ben Grounds

Pressure on Hasenhuttl after latest defeat 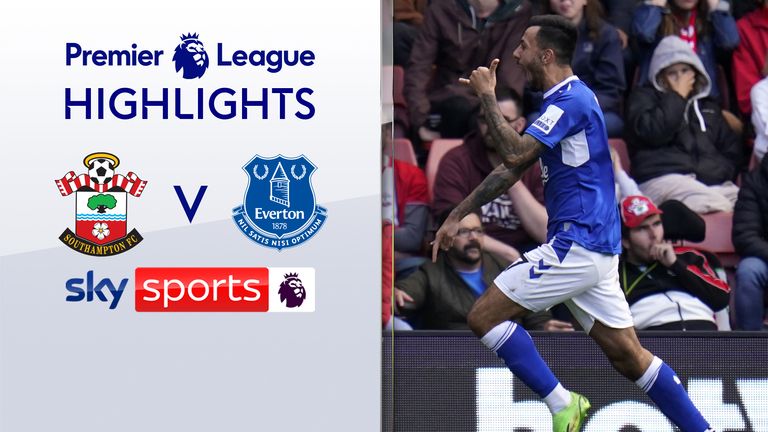 Highlights from Everton’s win against Southampton

“It was horrible to watch.” Those were the words of Ralph Hasenhuttl after Southampton lost 1-0 to Aston Villa before the international break.

Saturday’s defeat at home against Everton wasn’t quite as disappointing – there was a clear improvement in terms of chances created – but overall it was another disjointed performance.

Southampton’s first game at St Mary’s since an impressive 2-1 win over Chelsea at the end of August looked – on paper, at least – an ideal opportunity to turn their poor form around after back-to-back losses at Wolves and Villa Park. Instead, it is now three defeats in a row.

Hasenhuttl has been under pressure before since taking charge in 2018. He has, after all, bounced back from two 9-0 thrashings during his tenure, so it would be no surprise to see him recover from this latest run of poor results.

But this is perhaps his toughest test. When the clock struck 78 minutes against Everton, shouts of ‘what are you doing?’ and ’12 minutes to save your job’ could be heard from some disgruntled supporters.

The Southampton boss said he was not under pressure before this game. It will be interesting to know what he really thinks now.
Dan Sansom

But after Saturday’s 2-1 comeback win over Southampton at St Mary’s, Frank Lampard’s side are now unbeaten in six league games (W2 D4). It’s their longest such run in a single campaign since 2016/2017.

In his programme notes before last month’s home draw in the Merseyside derby, the Everton boss spoke about the process of rebuilding and said his team will get better.

Two matches later, his statement appears to have been justified. After four consecutive draws, back-to-back victories over West Ham and Southampton are signs of improvement and progress.

‘Super Frank,’ the Everton fans chanted at full-time. The Lampard era is well and truly up and running.
Dan Sansom