Here to defend two minutes of injury-time after seven substitutions and five goals at the Etihad, plus much more – is former Premier League referee Dermot Gallagher with Ref Watch.

Although the result was already far beyond doubt, eyebrows were raised in the Manchester City ranks when only two additional minutes were signalled by the fourth official at the end of their 6-3 rout of United in the Manchester derby – after witnessing three separate substitution stoppages and five second-half goals.

Speaking on Sky Sports News as part of his weekly grilling, Dermot said: “It was unusual to have two minutes added on at the end of the Manchester derby. We’ve had three or four minutes added on in first halves, five and six in second halves.

“There’s much more time added on than ever before, but the Manchester derby was very unusual.” 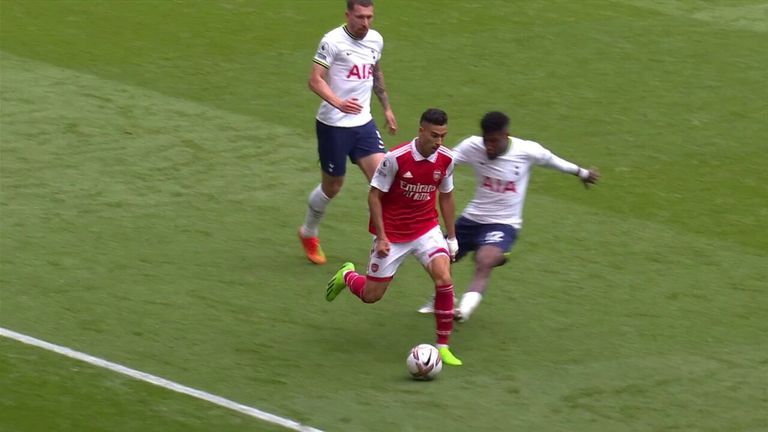 INCIDENT: Emerson Royal attempts to challenge Gabriel Martinelli on the flank, with his studs catching the Brazilian on the side of the ankle, above his boot. He is shown a red card by Anthony Taylor, which is then upheld by VAR.

DERMOT SAYS: “I think, when you see the assistant’s view, because I’m sure he played a major part in this, he sees the coming together – this is what they’ve worked on all season and I thought it was inevitable it was going to be a red card.

“It’s what we’ve seen this season, we’ve seen a challenge directly above the ankle, with the studs. I defend the referee compared to the Virgil van Dijk challenge in the Merseyside derby, but I don’t think that was a red card anyway.” 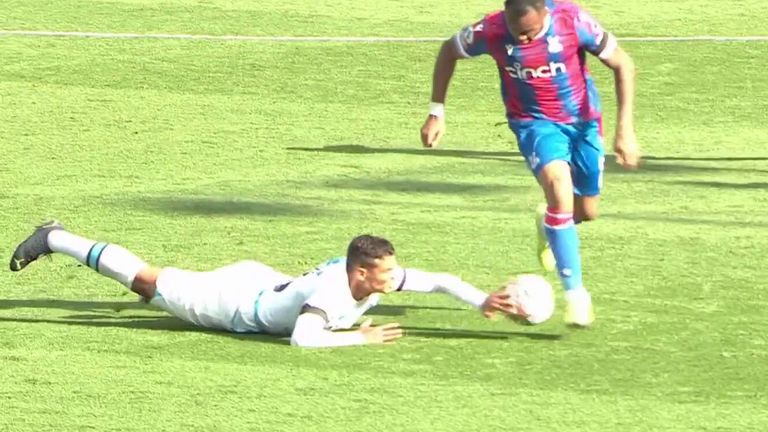 INCIDENT: Thiago Silva is caught in possession by Jordan Ayew in the Chelsea half, where he is debatably the last man. He loses his balance in the challenge and ends up on the floor, where he slaps the ball away from the Palace forward, who is heading away from goal.

He is shown a yellow card – but Palace chairman Steve Parish tweets, “What is the point in VAR?” in frustration that he was not sent off.

DERMOT SAYS: “I think it’s a yellow card and the referee’s right. I think it’s a possible goalscoring opportunity, not obvious. He has to get the ball, he has to go a long way towards goal. Will he be able to get there before the defender? It’s got to be obvious to send him off.

“Someone did throw in a red herring to me saying there’s two handballs so two yellow cards, but you only give one handball so that kills that one.” 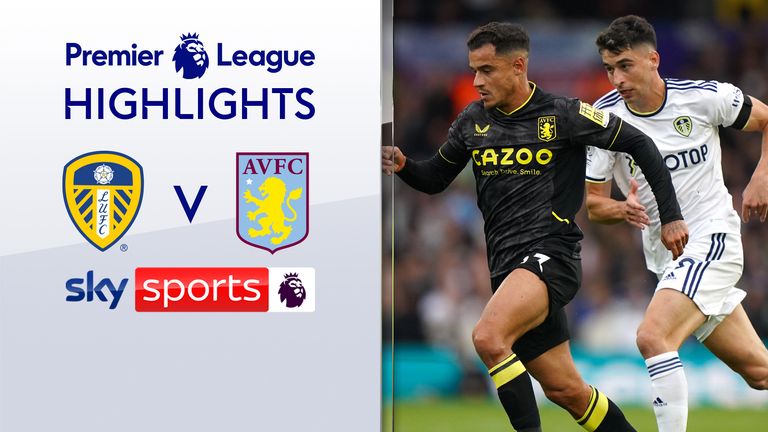 Highlights from the Premier League match between Leeds and Aston Villa

INCIDENT: Tyrone Mings is pulled down by Liam Cooper from a free-kick inside the Leeds penalty area. The referee waves away the incident, and VAR does not intervene after a brief review.

DERMOT’S VERDICT: Could easily have been given.

DERMOT SAYS: “That’s a massive risk to do that, why you’d take that chance. If his challenge isn’t seen, and that one is, if the VAR sent the referee over to the review monitor, I think they might recommend a penalty.

Is Antonio Conte right with his VAR complaints?

Dermot says:
“It’s got better, it’s got quicker. It’s a work in progress, it’s the third year in this country – and it’s better than it was two years ago. There’s the movement now to get dedicated VARs, Mike Dean and Lee Mason, they’re there every week, and entrusted.

“Referees are now going in, they’re circulating, learning about it. It’s never going to be perfect, people will always agree on decisions. That’s what happens, we see things differently. You’ve got to judge the whole package, not just one decision.”

“If he gets a penalty given against him, I don’t think he’s got much argument about it.”

INCIDENT: Luis Sinisterra is shown a second yellow card three minutes after half-time for sticking his leg out to block an Aston Villa free-kick inside the opposition half.

DERMOT SAYS: “Why give the referee the opportunity? You’re on a yellow card, you’re just asking them to make a decision. The only decision he can make there is a yellow card, he’s got nowhere else to go.

“You’re sent off on the halfway line with very little danger, and he’s paid a very, very heavy price. He’s given the referee no option.” 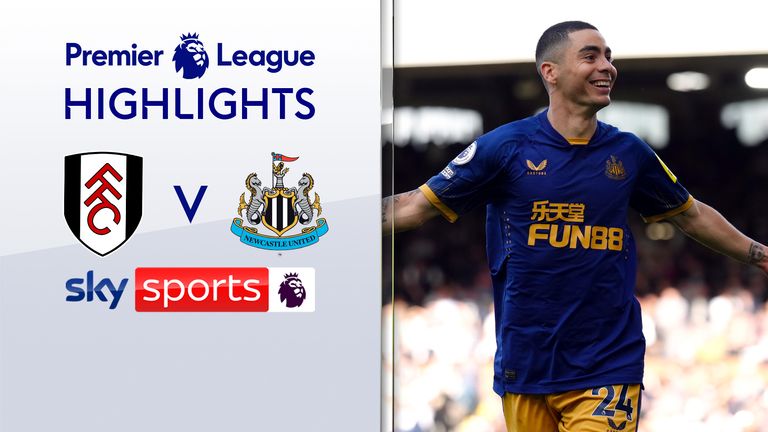 FREE TO WATCH: Highlights from Newcastle’s win at Fulham in the Premier League

INCIDENT: A sliding challenge from Nathaniel Chalobah catches Sean Longstaff on the side of the shin. Darren England initially shows him a yellow card, before VAR Mike Dean sends him over to the review monitor – and he changes the booking to a red card.

DERMOT SAYS: “It’s a good intervention from Mike Dean to send Darren England over to the screen. He’s gone with studs, again above the ankle, and he probably didn’t mean to do it but when he sees it again, it’s a red card.” 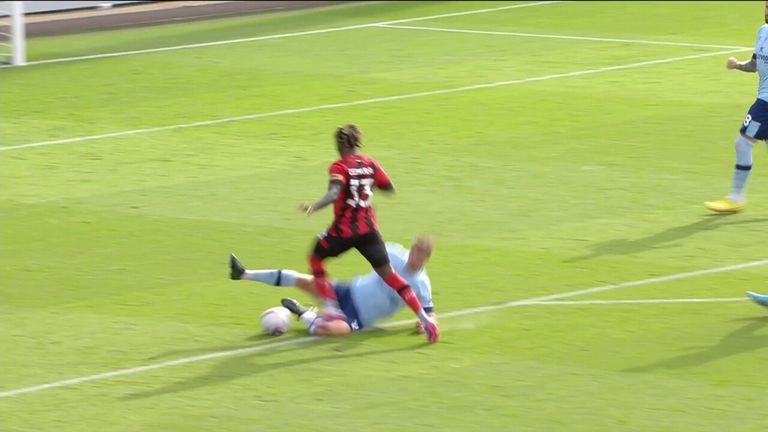 INCIDENT: Running onto a ball into the box, Jordan Zemura is knocked off his feet by a sliding challenge from Brentford’s Kristoffer Ajer. Referee Thomas Bramall waves away calls for a penalty but is then sent to the VAR review screen – where he stands by his original decision.

DERMOT SAYS: “I thought it was a foul, I thought it was a penalty. Ajer gets the ball after the man, and when he’s slid in, Zemura goes to jump in – Ajer brings his leg up. If you’re sliding in for the ball, you don’t have to bring your leg up that high, so that’s why I think it’s a penalty.

“I wonder, when Tom goes to the screen, whether he’s thinking about the fact that Ajer’s got the ball. There’s no doubt he’s got it, eventually. He may have not recognised that he’s gone through the player first.”