Charlie Appleby is relishing the prospect of seeing Adayar lock horns with Baaeed in the Qipco Champion Stakes at Ascot, live on Sky Sports Racing on October 15.

Last season’s Derby and King George hero missed several engagements earlier this year due to the fact he was not entirely pleasing his trainer at home.

The Frankel colt eventually returned from 11 months off the track at Doncaster’s St Leger meeting and predictably outclassed his two rivals, setting up a return to Group One level in the autumn.

A second tilt at the Prix de l’Arc de Triomphe, in which he finished fourth last season, was briefly mooted – but Appleby ultimately decided to keep his powder dry for Champions Day, where he is set to meet with the brilliant Baaeed, who will bid to crown an unbeaten career with an 11th victory.

Providing an update on Adayar’s well being on Tuesday morning, Appleby said: “I’m delighted. In the last couple of months he’s been showing the right signs again, they were what we saw in the spring and obviously what we saw as a three-year-old.

“I think people have heard me say before it was frustrating watching the Coronation Cup and the King George go by with him stood in his stable, but we’ve always felt we had to do what’s right by the horse and we reached a point where we just completely let him go and said we’d let him tell us when he was right and ready.

“Going into Doncaster we were very confident as he’d been showing us the right signs and he duly obliged as you’d expect to see a King George and Derby winner win.” 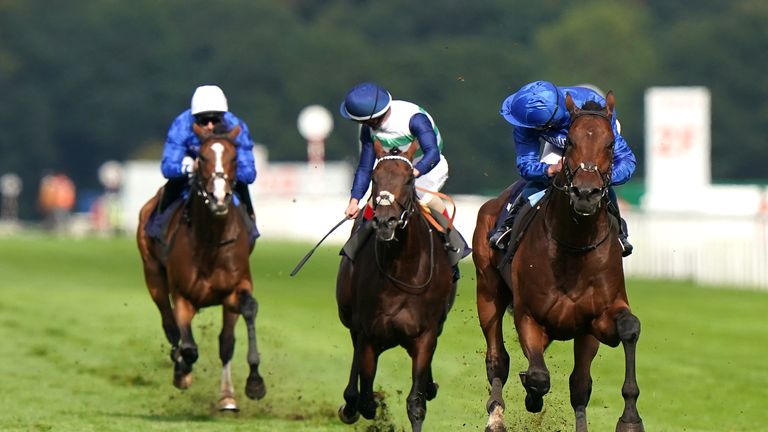 Trainer Charlie Appleby was delighted to see Adayar enjoy the ‘perfect gallop’ at Doncaster as he gets ready for Ascot.

The Moulton Paddocks handler would love to see Adayar win a Group One over 10 furlongs to boost his potential stallion value and hopes his relative freshness will prove key.

He added: “Coming back to a mile and a quarter was something I felt was going to suit him – he’s out of one of our homebred mares (Anna Salai) and is by Dubawi, so pace was always there.

“It’s going to be a great race (with Baaeed). It is what racing wants and it is what we want to see, two good horses going head-to-head. You only need two horses for a race and hopefully if those two turn up it will be good enough.”

Whether Adayar will race on beyond Champions Day this year appears dependent on the result.

Appleby said: “If we’re lucky enough to win I’m sure we’ll talk as a team and say is that enough for this year? We could potentially look forward to next year and what may lie ahead.

“Or, if he gets beat and finishes second, do we look towards the Breeders’ Cup as well? It wouldn’t worry me travelling with him and he has fresh legs, but we’ll get Champions Day out of the way first.”