Caroline Dubois, the talented Olympian who is just three fights into her professional career, gets the step up she needs on the Claressa Shields vs Savannah Marshall undercard, live on Sky Sports on October 15.

As an amateur Dubois was unbeaten as a junior and youth, winning the World Youth Championships and the Youth Olympic Games. She became a Tokyo Olympian last year and has showed off her skills along the way to going 3-0 (2) as a pro.

On October 15 at the O2 she is matched with Milena Koleva, a former world title challenger. The Bulgarian does have a losing record but she has boxed the best women in the sport, and almost always gone the distance with them. 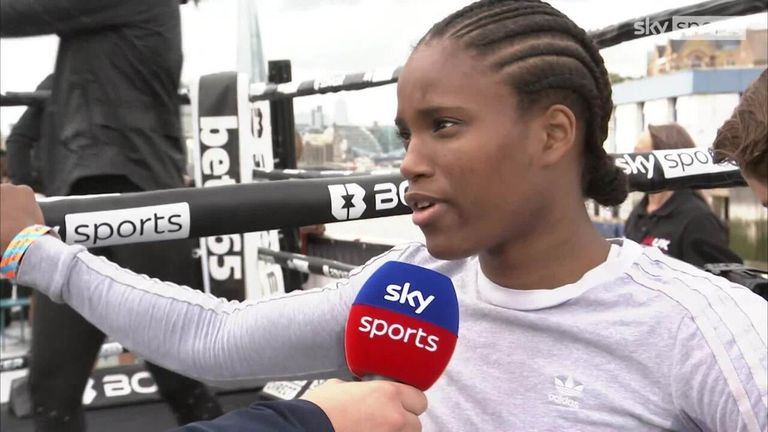 Dubois is delighted to be boxing on a historic night for women’s sport when Savannah Marshall takes on Claressa Shields, live on Sky Sports

It is the first move into the next stage of Dubois’ career. It will set up her own march towards a world title fight.

“I’m excited,” Dubois told Sky Sports. “This is a start. If I can’t beat this girl I can’t be fighting for world titles can I?

“But it’s obviously a stepping stone. You have to eventually move up the level of opposition that you’re fighting and I’m doing that now.”

“She’s fought Katie Taylor, Firuza Sharipova, Delfine Persoon, Maiva Hamadouche. She’s fought high-level people. So she’s going to be experienced in the ring. She’s going to know how to handle herself. She isn’t going to be a deer under the headlights and she knows she’s coming in against a professional novice, so maybe she will want to try and expose that.

Koleva is a test for Dubois. But the bout is also an opportunity. It is the chance for Dubois to show the level she is capable of competing at.

“I want to go out there with a dominant performance and I want to beat this person up. It doesn’t matter if I stop her or not. I just want to make sure she comes out the ring thinking, ‘Damn, I was in there with a girl that’s miles ahead of me’. I want her to feel the difference when we’re in the ring,” Dubois said.

“This is just stepping stones. She isn’t someone who’s been beating world champions but she’s a gatekeeper. In women’s boxing we don’t have such a deep pool. We don’t have the levels to go up like the men do. So we go from one stage straight on to the next one.

“After this one, I want to have one more fight this year and then hopefully five fights next year and hopefully by the end of next year I want a world title or be in serious contention for one.”

All tickets purchased for original Shields vs Marshall date remain valid for October 15. Last remaining tickets can be purchased at boxxer.com.