United States captain Becky Sauerbrunn has called for the removal of individuals at the National Women’s Soccer League (NWSL) and US Soccer who failed to protect players from abuse, after an inquiry found widespread misconduct in the professional league.

US Soccer brought in former US Deputy Attorney General Sally Yates and King & Spalding LLP a year ago to conduct an independent investigation after a report in The Athletic outlined allegations of abuse in the NWSL, prompting a reckoning across the league.

The results of the Yates report, released on Monday, said abuse and sexual misconduct spanned multiple teams and coaches, and that the NWSL and US Soccer failed to put in “basic measures” to safeguard players or “respond appropriately when confronted with player reports and evidence of abuse”.

US Soccer said it would move swiftly to implement reforms. The NWSL said it would immediately review the findings of the inquiry.

“Every owner and executive and US Soccer official who has repeatedly failed the players and failed to protect the players who have hidden behind legalities and have not participated in these investigations should be gone,” said Sauerbrunn, speaking to reporters from London, where the US are due to play European champions England in a friendly on Friday.

“At the bare minimum, the recommendations that are in the Sally Yates report should be immediately implemented by US Soccer and by the league.”

Friday’s match was expected to be a joyous occasion for the four-time world champions, as they face England in front of a sold-out crowd at Wembley Stadium.

Instead, the US players are putting on the jersey for a federation that failed to provide basic protection from abuse for players in the top-flight American professional league for years, according to the Yates report.

“The players are not doing well. We are horrified and heartbroken and frustrated and exhausted and really, really angry. We are angry that it took a third-party investigation,” said Sauerbrunn.

After Wembley, the US travel to Pamplona to play Spain, a team embroiled in controversy of their own after the Spanish FA (RFEF) issued a statement last month that it received 15 emails from players saying their relationship with their coach was affecting their emotional state.

Moments before Sauerbrunn met the media, Merritt Paulson, the owner and CEO of her team, the Portland Thorns, said he would remove himself from “Thorns-related decision making” until a joint investigation between the NWSL and National Women’s Soccer League Players Association (NWSLPA) is released.

The Yates report said the Thorns organisation interfered with access to witnesses and “raised specious legal arguments in an attempt to impede our use of relevant documents”.

The report also said the club failed to make public accusations of abuse against a coach after terminating his contract in 2015 and that US Soccer and the NWSL did not stop him from coaching elsewhere despite being aware of the claims.

“Yesterday’s Yates report unveiling was the darkest day I have experienced,” Paulson said in a statement. “I would imagine that it was even harder and darker for those whose stories were shared publicly.” 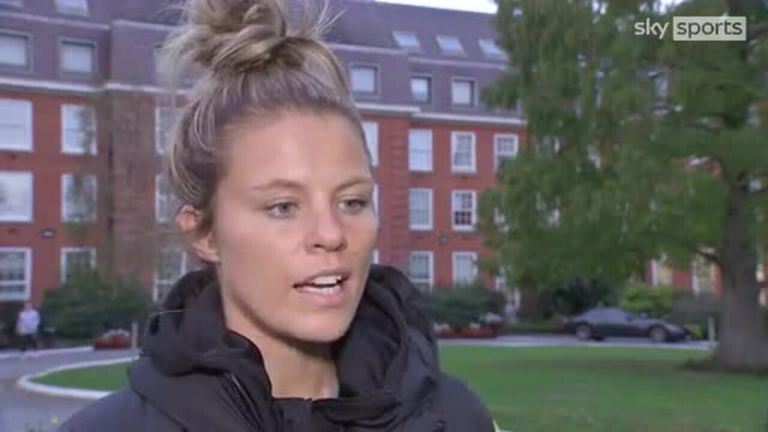 “I was saddened to see it [the report]. Coming off the training pitch to that news it is heart-breaking and it was sickening,” the Aston Villa player told Sky Sports.

“I could use many words to describe how I felt about that but those really jump to mind.

“It’s absolutely terrifying that girls are still going through this and that people are abusing power.

“For us as females it is a very dangerous place to be when things like that happen and all I can do and say is that the rest of the women’s football community stand in solidarity with the girls that have been affected.

“But, the NWSLPA have done a fantastic job there. They are a brilliant group of women and players, and behind the scenes they work tirelessly to make a safe space for everybody to speak about things.

“So, they have a done a fantastic job in allowing that platform for people to openly speak about that, and I can only say, like I said, I stand in solidarity with these girls and raise awareness for things like this.

“We shouldn’t have to, but my heart is with them and hope that finally these things can be put to an end.”